There is one last story from my Rally marathon that I need to share.

Meet Mr. and Mrs. Beasley.  They are from northeast Georgia but were in Cedar Rapids for an extended stay to care for two of their many grandchildren.  It was just about 3:00 when I arrived to stand in line next to them.  Mr. Beasley was my first interview of the Trump rally,

In the six hours we would spend together waiting (Trump’s arrival was almost 2 hours late), I would learn that Mr. and Mrs. Beasley also struggled with Secretary Clinton’s role in the Benghazi deaths.  Deeply skeptical of media and the polls, in many ways they might have been just about the best representation of a centrist Trump supporter I have encountered.

In the final moments before the rally began, as we sat along side each other, Mrs. Beasley asked me if I supported Mr. Trump.  She asked in earnest and in that moment, I decided to put aside my neutral facade.  Mr Beasley took note and leaned in to hear my answer,

“I do have several concerns about Mr. Trump but in the end it has come down to this for me…  Mr. Trump has demonstrated a lifelong pattern of cruelty.  By this I mean inflicting pain and distress on people senselessly, to further no cause, to achieve no end.  And I can think of no time in our history when a manifestly cruel person was given power and a military that ended well.”

There was a pause.  Mr Beasley had been looking down as I spoke, but he raised his eyes and there was a softness in his face.  This is not to say he agreed.  But he heard me.

It was hard not to make comparisons.  I cannot remember an election when the contrasts were so stark, and seeing both candidates in one day, back to back, was an exercise in mental juxtapositioning (yes, I invented a word)  Lets start with size.  My estimate was that there were approximately 3,000 people at Hillary’s rally, while I would put Donald’s (yep I am going with first names) at just over 4,000.

Hillary’s campaign organization and volunteers were widespread and busy arranging  get-out-the-vote activities.  I did not see much active campaign efforts at Donald’s rally, most notable, they did not even collect the tickets which had our contact information.  Not surprisingly (Hillary’s rally was the Iowa Democratic Party “Women Win” early vote rally) was predominantly women (I am guessing 70%) who brought their children while Donald’s leaned male and far less children.

Most of all, you can notice a significant difference in tone in their introductions and opening comments.  Oh and Hillary had an advance  team filled with people like Cecile Richards, head of Planned Parenthood.  Donald had a former Celebrity Apprentice.

Curve Two:  Moments after arriving at the Hillary event and having established myself in a bleacher with a good view of the crowd, my cell phone went off.  My boss had texted me ‘oh my did you pick an interesting day to go to the rallies’  I was speaking to a group of African American women and had no idea what we was talking about.  My cell phone lit up with ambiguous messages like ‘what is happening???’ Please people, text in complete sentences!  Then finally, ‘was texting because of FBI news…. reopening case against Hillary’.  Sigh.  I looked up and surrealistically (yep, a new word) watched as attendees faces turned down to their phones and slowly learned the same news.  Other worldly.

Curve Three:  And the best moment of my day.  It occurred at the Trump rally when I met Mike Brown. He defied my assumptions and presented one last turn in a day full of them. 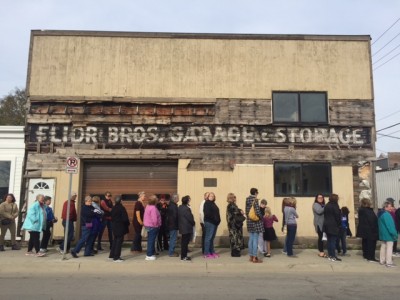 There is a reason that the good people who design highways labor to keep the routes straight and flat.  Any curvature, whether vertical (hills) or horizontal can wreak havoc with vehicles expecting to continue at high rates of speed without a line of sight to what lays ahead.

The approach to Cedar Rapids brings this into sharp focus as I-380 curves dramatically right, then left as it rises to cross the Cedar River and circle the huge historic Quaker Oaks factory.  One of the most dangerous stretches of highway in the country (I have this on good authority from a local sheriff, interview to follow) the resulting I-380 S-Curve was the perfect metaphor for my experience at the Hillary Clinton and Donald J. Trump rallies.

My long day yesterday resulted in about 3 hours of video and wonderful stories If you will bear with me, I will (like any good s-curve) go slowly and start at the beginning.

The most surreal aspect of the day started first thing.  I was capturing the line which formed early, when a young woman approached with a dog.  It appears that he had gotten away from his owner and she was frantically looking for him.  More, the young concerned woman was wearing a Trump/Pence shirt.  Instantly, the Hillary supporters in the area rallied to help.  Within minutes, a young man ran up, clearly delighted to find his dog.  It was a lovely moment, and I turned on my GoPro to capture it.  Please indulge me and watch the video below before reading on…

Curve one:  When I turned from filming, I noticed a camera crew to my left.  They were filming me, filming the scene.  This was a professional production crew of about 8-10 people.  Turns out they were filming a documentary and had staged the scene with actors.  A social experiment, they had also conducted the same scenario at Trump rallies with actors in Hillary apparel.

This was just the beginning of a day full or turns and surprises.

UPDATE:  On election morning I was getting ready for work with the TV on in my bedroom when I glanced over to see a dog on the screen.  I knew that dog.  So here you go friends, the ‘documentary’ was a commercial and now stands as living proof of my no-make up, bad Walmart dye job and cow pants.