I woke up this morning in a bit of a debate hangover.  Things felt out of focus and I was trying to process what I had seen and how I felt about it.  All the words were there, I just really needed to sort them out in my brain.

I needed caffeine.  Specifically Diet Coke (surprise) and it was actually an afterthought that I even grabbed my camera.  But there I was, alone with my thoughts and my favorite carbonated beverage when I overheard two gentlemen discussing the debate.  W.W. (that is what he asked me to call him) had handwritten notes and had clearly given great thought to his observations.

Upon introducing myself, they were gracious and minced no words.  W.W. was ‘Alt Right’ and clear on what that means.

Now it may seem counter-indicated, but my time with W.W. helped.  This entire exercise is based on the thesis that public discourse has diminished as people feel unable or unsafe sharing their political thoughts and concerns at home, at work, in their communities.  Here were two friends, carving time to discuss and review their thoughts and willing to share them with me.

Did I understand it?  Maybe not.  But at least we were talking,

Post Script – I tried last night to locate the Will Rogers quote and was not able to verify it.  However, when reviewing my notes, I discovered a W.W. quote that he had expressly asked me to share, and I want to keep my word,

Here I am Lord, it is I Lord
I have heard You calling in the night.
I will go Lord, if You lead me.
I will hold Your people in my heart.

If I felt out of place even for a moment at Our Lady of Guadalupe Church this morning, the first notes disavowed me of that feeling.  It was the 10:30 English mass and it began with one of my favorite hymns.  Extraordinary.

It is a humble setting, a bit in disrepair, but every pew full.  Father Miguel Campos spoke of gratitude and prayer, heavily accented through a poor microphone, his message came through loud and clear.  After the service, Fr. Campos went directly into the next of a total of 6 Sunday services he would officiate this day.  He kindly directed me to Linda Ortez and Stella, both liturgists who shared their concerns and hopes for their community.

In the spirit of better acoustics, I will be trying a new mic tomorrow and hope to improve in future posts.

Wishing you all a peaceful debate night.

Beginnings are, by their nature, confounding.  There is the excitement of the unknown tempered with the very real doubt resulting from what you do know.  In my case, it comes in the form of a new medium and new tools.

And so I set out this morning with the help and love of so many friends and family (more on that to come).  For now, my love and deep thanks for your help and encouragement.  Confession #1:  This morning’s video of my send off was lost to improper settings on my camera.  Lesson learned.  Gratitude remains.

Today I stopped to eat in Fresno (of course!) and had a remarkable meal at Diana’s Armenian Cuisine.  Looking for the Lakmajoon of my childhood, it turns out that they did our family one better with a variation called Lulu Lavosh 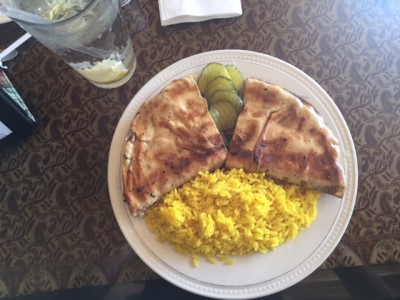 Confession #2 – While I have completed today’s video, I have not been able to upload it to youtube with my current hotspot.  As soon as I am able in the morning I will be sharing the comments from my fellow travelers here in Delano, Francois and Lara.  For now, my thanks to you all for a wonderful first day on the road.